Understanding the mechanical and adhesion properties of skin surface

The protective function of biological surfaces that are exposed to the exterior of living organisms is the result of a complex arrangement and interaction of cellular components. This is the case of the most external layer of skin, the stratum corneum (SC). It is composed of corneocytes, elementary ‘flat bricks’ embedded in a lipid matrix. These corneocytes are arranged in layers and adhere to each other through junctions called corneodesmosomes.

Stratum Corneum lipids also play a key role in saving the water barrier of the skin.

The composition of the SC lipid matrix is dominated by three lipid classes: cholesterol, free fatty acids and ceramides. It has been proved that ceramides level decreases with increased age (1) as well as in skin health conditions as atopic dermatitis (2).

Adhesion and mechanical interaction between lipid layers are essential characteristics to highlight the protective function of the Stratum Corneum but are generally poorly understood. New insights provided by Atomic Force Microscopy (AFM) pave the way for new cosmetic products development.

Adhesion forces are involved in a mechanism by which cells interact and bind to neighbouring cells, substrates and matrix. It is a necessary mechanism for structural integrity and barrier function of the epidermis.

Some studies have explained the role of individual cell-cell junctions and their protein complexes in regulating epidermal development and function. Adhesion is provided by specialised cellular connections, mainly adhesion junctions (AJ), desmosomes, and tight junctions but not only. Contribution of the skin surface film is also essential. We will focus here on the outermost layer, the Stratum Corneum, specialized to protect from water loss, dehydration, and toxin entry into the body. Many factors influence the adhesion measured with AFM, including not only chemical composition, surface morphology, but also water absorption.

Adhesion is so directly correlated to the composition of skin surface lipids. More the skin will contain intercellular lipids, more it will be adhesive as they act like a water-retaining.

Adhesion is measured at a nanoscale level by using the pull-off force when the tips withdraws the sample at the skin surface area end suddenly repelled. Then, according to Hooke’s law, adhesion force is characterized by the bending of the cantilever.

Thus, using a simple AFM measurement, it is possible for the skin to measure adhesion forces. These last ones indirectly correspond to a hydration state, provided by the level of lipids present in stratum corneum.

Atomic Force Microscopy is so versatile that we can as well measure stiffness, elasticity but also adhesion. Such a great tool to characterize skin behaviour and assess active ingredients, formulas or finished products dedicated to maintaining, regulate and beautify our skin.

(2) J Rogers, C Harding, A Mayo, J Banks, A Rawlings, Stratum corneum lipids: the effect of ageing and the seasons 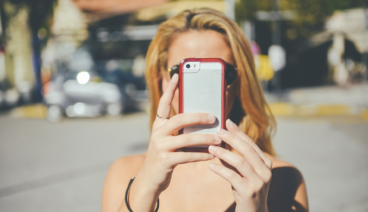 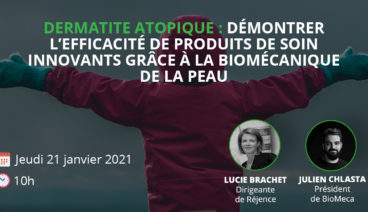 Demonstrating the effectiveness of innovative skin care products through biomechanics: the replay of our webinar!

“Atopic Dermatitis – Demonstrating the effectiveness of innovative skin care products through skin biomechanics”, a special webinar about an innovative study presented by Julien Chlasta, CEO of BioMeca, and Lucie Brachet, Founder of Réjence. Only available in French.
Read more

Coronavirus: how this virus can affect our largest organ, the skin?

There’s no need here to list the usual clinical manifestations of COVID-19 infection. They are many and sadly may lead to acute respiratory distress syndrome and death. Let’s focus on a special topic : our skin. The skin symptoms have been poorly described…
Read more